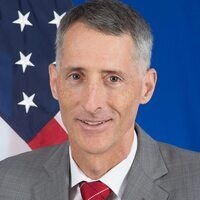 Are you interested in working in the U.S. government or foreign service after graduation? Learn more from experienced U.S. diplomat Jonathan Fritz, visiting the Drake campus to participate in the U.S.-China Symposium.

This event is hosted in partnership with Drake Professional & Career Development Services.

Jonathan Fritz has been the Chief of Staff to Jose Fernandez, the Under Secretary for Economic Growth, Energy & the Environment, since August, 2, 2021. Previously, he served as the Deputy Assistant Secretary of State for East Asian & Pacific Affairs responsible for China, Mongolia, and Taiwan. Before that, he was the Director for Bilateral & Regional Affairs in the State Department’s Office of International Communications & Information Policy. Prior to that he was posted at the U.S. Embassy in Beijing, where he served alternately as Minister-Counselor for Economic Affairs, Chief of Staff, acting Deputy Chief of Mission, and chargé d’ affaires. From 2010-2014 Jonathan headed the economic sections of our embassies in Canberra and Kabul. Before that, he worked on trade, investment, and IPR issues in our posts in Beijing, Mexico City, and Hong Kong. Jonathan also served in Washington as a special assistant to Deputy Secretary of State Robert Zoellick, as a trade negotiator in the Office of the U.S. Trade Representative, and as a desk officer in the State Department’s Office of Chinese & Mongolian Affairs. Jonathan began his Foreign Service career with consular tours in China and Ecuador. Jonathan spent two years at the U.S. Air Force Academy and graduated from Stanford University with a B.A. and an M.A. in East Asian studies.