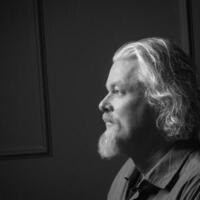 Curt Cardwell, Associate Professor of History, passed away suddenly on January 7, 2021, at the age of 55. Cardwell joined the faculty of Drake University in 2005, teaching the history of U.S. foreign relations, twentieth-century U.S. history, and modern world history. During his tenure at Drake, thousands of students came to know his love of history, his passion for debate, his booming voice, and his big heart.

Professor Cardwell held the Ph.D. in History from Rutgers University, where he studied with Lloyd Gardner, one of the most prominent diplomatic historians of the twentieth century. A talented scholar and member of the Society of Historians of American Foreign Relations, he published NSC 68 and the Political Economy of the Early Cold War with Cambridge University Press in 2011, a study that focused on the interrelationship between the massive U.S. rearmament program (NSC 68) and the development of the postwar capitalist global economy. Lived experience inspired the subject of Cardwell’s research.  He was a proud veteran of the U.S. Army, having served in Germany during the late stages of the Cold War.

Professor Cardwell was working on a study of the Cold War and the US interstate highway system, which was left uncompleted at his death.

His colleagues and students will miss him greatly.

Friends, colleagues, and alumni wishing to honor Professor Cardwell’s memory can make donations to the Department of History at https://alumni.drake.edu/giveonline.

A memorial service for Curt Cardwell will be live-streamed from Drake University on Thursday, May 6.