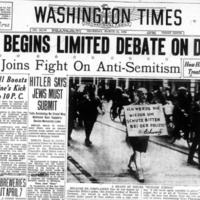 The Gauntlet Has Been Thrown: Newspapers, Op-Eds, and American Responses to Antisemitism

This talk addresses the landscape of the United States from the end of World War I to 1941, identifying the historical and social context in which Americans lived. It will also examine the role media played in what Americans knew about the world around them. It concentrates on three influential American leaders, Henry Ford, Father Charles Coughlin, and Charles Lindbergh, who were all involved with the America First Committee and who all spread antisemitic vitriol to millions of supporters. News articles, editorials, and letters to the editor reveal how a number of Americans in various communities in the Midwest and around the country reacted to this antisemitic rhetoric. The talk concludes with generalizations from this period and lessons for the post-war era.

This program is made possible by the Campus Outreach Lecture Program of the United States Holocaust Memorial Museum's Jack, Joseph and Morton Mandel Center for Advanced Holocaust Studies, supported by the Leonard and Sophie Davis Fund.

Speaker notes: Eric Schmalz is the community manager for the History Unfolded project at the United States Holocaust Memorial Museum. He oversees the review of newspaper submissions to the project website, assists participants with their questions, and helps educators effectively incorporate History Unfolded into various learning environments. Mr. Schmalz specializes in developing and deepening authentic human connections through his work.

Free and open to the public.

The speaker was incredibly intelligent and an expert in the topic. He brought so many details to light, and he fielded questions easily. The event brought together students, faculty, staff, and many community members.