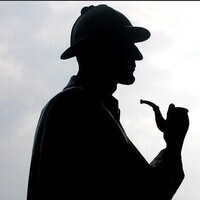 Cowles Library presents an exhibit of material highlighting the cultural phenomena created by Arthur Conan Doyle. The exhibit highlights Doyle’s creation through the books, images, and settings of the Sherlock Holmes stories, as well as the cultural bonds that Holmes has inspired. The exhibit includes material on Conan Doyle, the characters of Holmes and Watson, the image of Holmes developed and interpreted over the last hundred years, the settings of the stories, and the development of Sherlockian culture, and the continuing saga in new stories, television and movies. The exhibit draws on the collection of Rod Henshaw, former Dean of Cowles Library, as well as the personal collection of George Scheetz, of Batavia, Illinois.