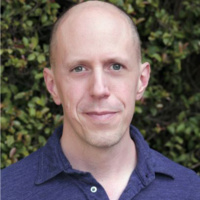 John August is a screenwriter and a novelist. His screenwriting credits include the live-action Aladdin, Go, Frankenweenie, Corpse Bride, Charlie and the Chocolate Factory, and both Charlie’s Angels movies. He received a 2004 BAFTA nomination for his screenplay for Big Fish and wrote the book for the Broadway musical version. He received a 2006 Grammy nomination for lyrics for “Wonka’s Welcome Song.”

His middle-grade novel series, Arlo Finch, is currently published in 13 languages, with the third book in the trilogy, The Kingdom of Shadows, due out in February 2020.

He co-hosts the weekly Scriptnotes podcast with Craig Mazin, and runs the company that makes the popular screenwriting apps Highland 2 and Weekend Read. He also maintains a popular blog at JohnAugust.com, as well as websites like screenwriting.io aimed at supporting screenwriters. He’s a member of the Academy and serves on the board of directors of the WGA West. He graduated from Drake University, earning a Bachelors Degree in Journalism followed by a Masters from the Peter Stark Producing Program at the University of Southern California.

Sponsored by the Honors Program Student Council and the Hawley Foundation | honors.program@drake.edu

I truly enjoyed this. It was both fun and educational to take a memory trip back to 2006 and compare how the social world has evolved and how we can remain professional within today's network. John is a composed and friendly speaker but pulls no punches with getting his message across. He was also gracious to hang out for questions afterwards... And he's taller than I imaged. 😁