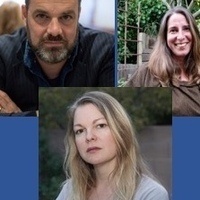 Grant Faulkner is the Executive Director of National Novel Writing Month (NaNoWriMo) and the co-founder of 100 Word Story. He's published Pep Talks for Writers: 52 Insights and Actions to Boost Your Creative Mojo; Fissures, a collection of 100-word stories; and Nothing Short of 100: Selected Tales from 100 Word Story. His stories have appeared in dozens of literary magazines, including Tin House, The Southwest Review, and The Gettysburg Review. They have also been included in anthologies such as Best Small Fictions 2016 and Norton's New Micro: Exceptionally Short Fiction. His essays on creativity have been published in The New York Times, Poets & Writers, Writer’s Digest, and The Writer. He also hosts Write-minded, a weekly podcast on writing and publishing.

Kim Magowan's short story collection Undoing won the 2017 Moon City Press Fiction Award and was published in March 2018. Her novel The Light Source is forthcoming from 7.13 Books in 2019. Her fiction has been published in Atticus Review, Bird's Thumb, Cleaver, The Gettysburg Review, Hobart, JMWW, New World Writing, Sixfold, and many other journals. She is Fiction Editor of Pithead Chapel. www.kimmagowan.com

Michelle Ross is the author of There's So Much They Haven't Told You (2017), which won the 2016 Moon City Press Short Fiction Award. Her fiction has appeared in Colorado Review, The Common, Gulf Coast, Passages North, Electric Literature's Recommended Reading, SmokeLong Quarterly, TriQuarterly, and other venues. She is fiction editor of Atticus Review and was a consulting editor for the 2018 Best Small Fictions anthology. www.michellenross.com